Creating the illusion of weathered and worn metal is so much fun to do with DecoArt Media products! In just a few simple steps, you can transform the plain grey chipboard-ish surface of the Tando Creations Industrial Elements Gears into the magic of rusted “metal”.

There are many gears, cogs, wheels, etc. in this set to mix and match. Here are a few tips using various DecoArt Media products to give you some different grungy rusty weathered effects for your gears.

Prepare all of the surfaces of the Tando Creations Industrial Elements Gears that you have chosen to use by painting on a light coat of DecoArt Media Gesso or DecoArt Media Crackle Paint (depending on if you want a crackled surface or not) and let dry. This is done to give “tooth” to the surface of the elements, to provide that beginning layer of texture and provide a white base color for the most true acrylic paint colors to emerge. 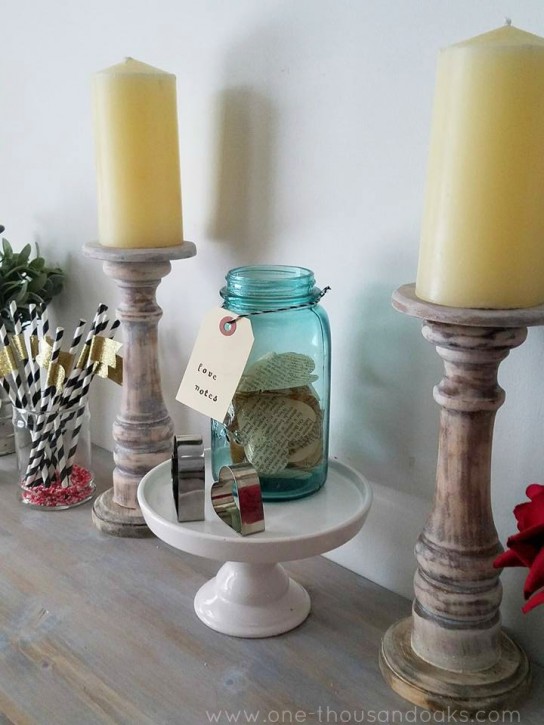 For this grungy rusty gear; the surface was first brushed with DecoArt Media Crackle Paint and let air dry. Then brush a thin layer of Deco Art Media Fluid Acrylics Metallic Silver over the surface and let dry. Next, add DecoArt Media Fluid Acrylics Quinacridone Gold over the silver to give a “rusted” appearance. Quinacridone Gold is a transparent medium that allows the color underneath to come through but adds a rich, rustic appearance. Finally, to give even more of a grungy weathered look; use your finger and gently rub DecoArt Media Carbon Black around some of the edges of the gear’s exterior and interior openings. Rub the black down into the cracks and then wipe away the excess with a paper towel or a fairly dry baby wipe. The black that is left behind adds a lot of definition and an aged appearance. 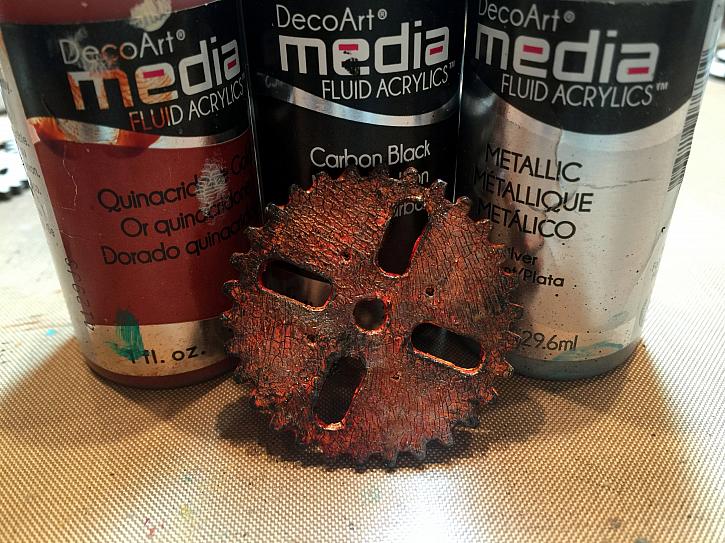 Continuing on using the same gear, I love to add a patina finish to my “metal” pieces. I first added a little bit of DecoArt Media Fluid Acrylics Titan Buff using my finger to randomly add the light beige touches to the rusty surface of the gear. While the Titan Buff is still wet, add touches of DecoArt Media Fluid Acrylics Cobalt Teal Hue with your finger over the Titan Buff. This gives a calcified and patina look at the same time. I love the color, the texture and the depth this step adds. 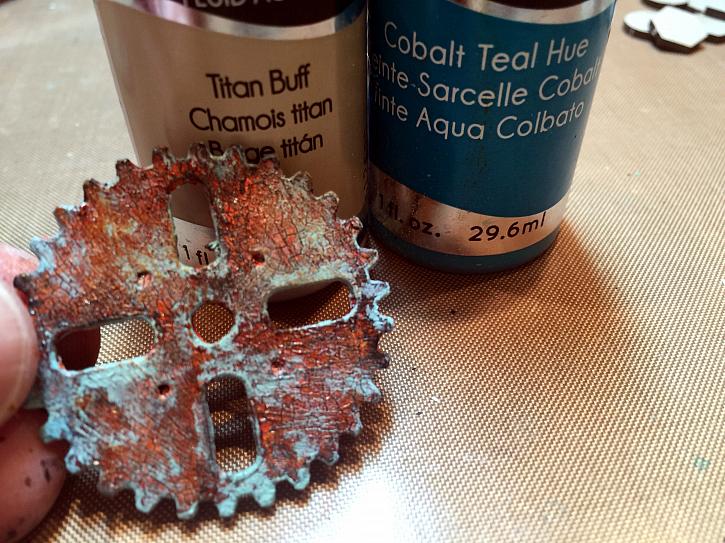 For this Tando Industrial Gear example, I glued the circle “bolts” on top of the circle base using DecoArt Liquid Glass. Then I randomly added splotches of the Liquid Glass on the surface of the gear and bolts, letting it run and create an irregular surface. Once dry, I painted over the surface with DecoArt Media Fluid Acrylics Yellow Oxide and let it dry. 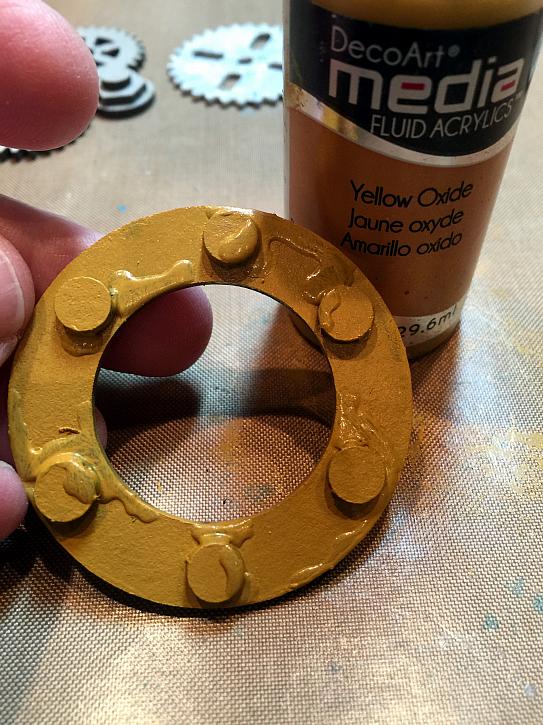 Next I added a lighter coat of DecoArt Media Fluid Acrylics Titan Buff to lighten and highlight the raised areas of the gear. 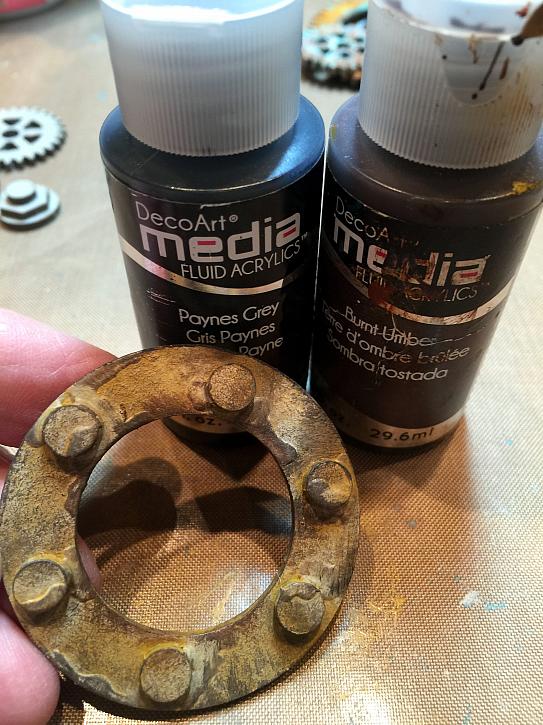 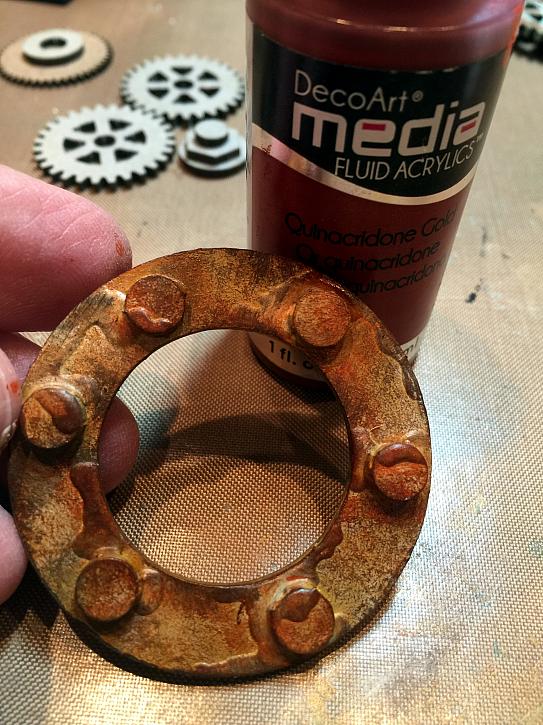 Next to give a deeper, more aged appearance, I added touches of DecoArt Media Fluid Acrylics Carbon Black sparingly on some of the edges of both gears and bolts. This really defines the shape of the gears and draws the eye inward. 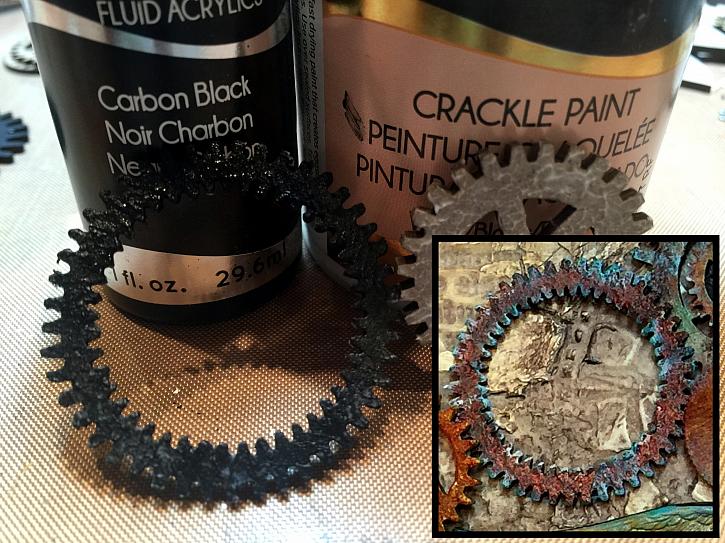 Here is a simple way to transform silver metallic wings into another metal color and texture using DecoArt Media products.

Give them a basecoat of DecoArt Media Fluid Acrylics Titan Buff and let air dry or gently heat set. If you heat set, let the metal cool before you attempt to pick up the metal wings!

Working from lighter to darker hues, use your finger to apply the next layer of color. This color will be DecoArt Media Fluid Acrylics Yellow Oxide. This color will warm up the Titan Buff and give more of a soft golden tone to the wings without using a Metallic Gold paint.

Next in the layering of color, I added DecoArt Media Fluid Acrylics Diarylide Yellow over the Yellow Oxide to brighten up the wings and give them more of a “golden” appearance without using a metallic gold paint. Again, let air dry or gently heat set.

Next in keeping with the patina theme on the other “metal” gears, I added touches of just DecoArt Media Fluid Acrylics Cobalt Teal Hue using my finger to lightly swipe over some of the raised areas of the wings and also randomly around the edges of the wings.

Finally, I added just a touch of DecoArt Media Fluid Acrylics Paynes Grey randomly on the outside edges of the wings to better define them and pull all the colors inward.

The Basic Layout Of The Gears On The Box Lid

Here is the basic layout of the gears on the box lid before I started doing much to the surface of the box. As you will see in the Altered Box Tutorial (coming later this week), this is not the finished design but it will give you an idea of how it began.